The first July edition of the Apparel Sourcing, Avantex, Leatherworld and Texworld Paris trade fairs has confirmed the gradual resumption of exchanges. Over three days, around 3,700 professional buyers were able to discover 400 international textile and finished product manufacturers selected by the Messe Frankfurt France team. The trade fair was held in Hall 4 of the Parc des Expositions de Paris - Le Bourget.

The summer edition held in July rather than September has allowed manufacturers to show they have been able to anticipate and prepare themselves for buyers expectations. The July trade fair also sees a return to the original format of the shows.

The July edition saw a 29 percent increase in attendance compared to the February 2022 edition.

French buyers were the largest demographic group, however, international buyers have found their way back to the capital. Texworld Evolution Paris saw the return of foreign visitors, totalling 83 percent of attendees compared to 65 percent in February. Most international buyers came from Europe with Spanish, English and Italian professionals making the top three largest international groups followed by Turkish, German, Dutch and American buyers.

Visible from the very first day, the strong increase in visitor numbers was reflected in the exchanges, whose dynamism gave the shows their true international scope. This impression was reinforced by the return of international exhibitors - 140 companies from China, 100 from Turkey, 60 from India, and 41 from Korea. Pakistani weaver Kohinoor Mills offers high quality menswear cotton fabrics and had a very active show in the Elite area of Texworld Paris, concluding several important contracts. Also within the Elite sector, Indian embroiderer Veekay International was able to meet buyers from nations that are not usually present at European trade fairs, such as Kosovo, Nigeria or Ghana, who placed orders for local markets.

Of the 140 companies exhibiting from China, 45 were grouped together in the Source from China area - a platform run by agents from FourSource, the digital partner of Messe Frankfurt France, and Chinese experts. 15 Chinese garment manufacturers presented complete white label collections designed for the European markets during the China Fashion Walk.

The textile expertise network of the Messe Frankfurt Group, Texpertise Network offered visitors a metaverse experience at their stand equipped with virtual reality headsets. Visitors were able to discover the possibilities of organising virtual and hybrid events, meetings and product showcases that metaverse and augmented reality allow. 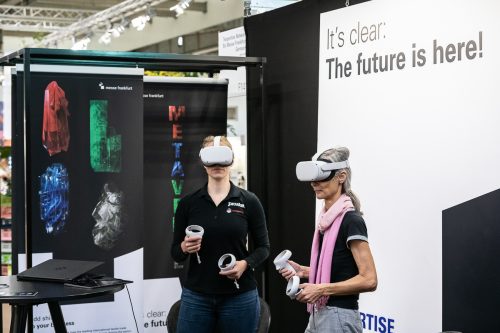 The Avantex Fashion Pitch prize was this year awarded to start-up Redonner, which offers a digital solution to enable fashion brands to direct the flow of unused clothing and textiles towards the French sorting and recycling sector. This tool eliminates the logistical constraints linked to collection and contributes to the development of the sector by increasing the volume of recycled clothing. This prize, which offers start-ups international visibility among industry professionals, was attributed by a jury composed this year of Kristina Dimitrova (Interlaced), Franck Delpal (IFM Paris) and Maxime Coupez (Nelly Rodi).

The next trade fairs have been confirmed with dates set for February 6-8 2023 at the Parc des Expositions de Paris - Le Bourget, and July 3-5 2023 at Porte de Versailles.