The latest edition of Expo Riva Schuh & Gardabags was inaugurated in the presence of the Minister, Luigi Di Maio.

The volume of the footwear and leather goods industry, in which Italy is the world's third exporter (+5.2 percent compared to 2020), once again sets off from here and form the key role of the trade fair - a fundamental internationalisation event for the Italian economy. 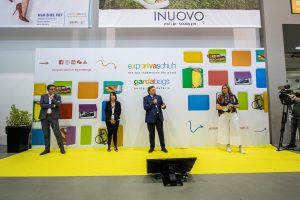 Expo Riva Schuh & Gardabags are back in Riva del Garda with a live edition. The re-launch was inaugurated by the official ribbon-cutting ceremony in the (virtual) presence of the Minister for Foreign Affairs, Luigi Di Maio. This important, long-awaited moment also featured the President of the Autonomous Province of Trento, Maurizio Fugatti, and the Mayor of Riva del Garda, Cristina Santi, introduced by the Chairman and Managing Director of Riva del Garda Fierecongressi, Roberto Pellegrini and Alessandra Albarelli.

The Minister, Di Maio, reiterated the importance of the footwear and leather goods industries, underlining the fact that Italy is the world’s third-largest exporter and, over the past six months, has seen export increase by 5.2 percent, compared to the same period last year.  During his talk, he also highlighted the role of the exhibition sector as a lever for the dynamics of internationalisation,   proposing the Italian embassies of the world as “business houses” available to organisers, companies and institutions to reach new markets. 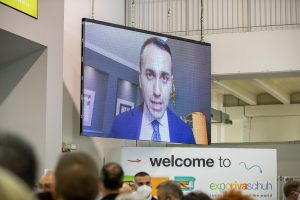 With this new edition, Expo Riva Schuh & Gardabags confirm their very essence as an innovative and hybrid hub thanks to the happy synthesis between physical and digital, capable not only of enhancing and promoting the potential of Italian brands but also of attracting brands from all over the world, confirming the role of the event as one of the main players in the development of the country's production system. 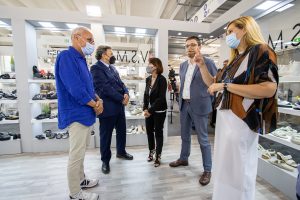 Likewise, President Fugatti and the Mayor, Cristina Santi also confirmed the important role of the event, thanking the organisers for having created an on-site international trade fair, in complete safety and in a small area, such as that of Trentino, which, at a time of great difficulty, managed to take a bet on the future and transform the crisis into an opportunity. An example of this resourcefulness is President Pellegrini's proposal to nominate Riva del Garda as the venue for the World Footwear Congress in 2023.

The marketplace dedicated to volume footwear, leather goods and accessories will run until July 20th and will welcome, on-site, over 400 exhibitors from 31 countries (in addition to the 123 businesses who opted to utilise just the digital platform). The event benefits from important collaborations such as those with the ICE and MAECI Agency, in addition to the fundamental contribution of consortia and numerous international trade associations which, as stated by Director Albarelli, guarantee the maintenance of the usual quality standards of the events.