As the Official Timekeeper of the NBA since 2015, Tissot is proud to announce Damian Lillard as its next NBA ambassador. A style icon, a recognised rapper and, above all, a leader in today’s NBA, the NBA All-Star point guard joins the extended family of the Swiss watchmaker. This partnership not only demonstrates the brand’s love for basketball but is also proof of Tissot’s passion for culture. 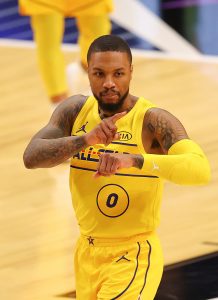 In the last few minutes of the game, when everything is on the line and tensions are high, few have the ability to rise to the occasion and take over the game like Lillard. It is during those clutch moments when Lillard points to his wrist signalling that it’s 'Dame Time'. What a perfect reason to become an ambassador for the brand, which has been developing ever more innovative timing and scoring systems since becoming the first Official Timekeeper of the NBA.

"I am excited to be a Tissot ambassador and welcome the authentic brand as the exclusive partner of Dame Time! I’m proud to be aligned with a partner that embodies the spirit of Dame Time on and off the court," remarked Lillard.

"We are proud to enhance our NBA partnership by welcoming Damian Lillard into the Tissot sports ambassador family. On and off the court, Damian conveys the values that are important to Tissot. Day after day, he continues to show that he is an exceptional basketball player who surpasses his own limits in terms of performance, excellence and generosity. With his legendary celebratory gestures, he invites everyone to do their best, too. It’s Dame Time for Tissot," expressed Sylvain Dolla, CEO of Tissot.

Selected by Portland as the sixth overall pick in the 2012 NBA Draft, Lillard then won the NBA Rookie of the Year Award in 2013. Loyal to the Trail Blazers, he has pursued his career with the Oregon team, rising to legendary status. Beyond his unquestionable athletic abilities, Lillard is known for being a multi-hyphenate athlete. An acclaimed hip-hop artist known as Dame D.O.L.L.A., he has released three albums on his own independent label Front Page Music. Lillard is the spokesman for the RESPECT program, an initiative he started eight years ago that encourages students in Portland-area high schools to show up, work hard and be kind.

Damian Lillard is a once in a generation athlete with his own unique approach to watches.

"A watch is one of my essentials,” explained Lillard.

“I like attractive, accessible watches that adapt to every style. That’s why I love Tissot. I can wear a Tissot to the gym, while travelling from one city to another, or to go out for the evening. These watches offer a distinctive look and flawless Swiss-made quality.”

Django Unchained star Kerry Washington​ usually radiates glamour on the red carpet. However, at the 72nd Golden Globe awards in California, some areas…