Reebok has made waves in the sports bra industry with it’s 2018 PureMove Bra launch: a first of its kind, technologically advanced sports bra that uniquely responds and adapts to movement to provide women with a customised amount of control and support, exactly where and when they need it.

For too long, consumer insights have identified frustrated female consumers who feel unsatisfied with their sports bra options, raising flags with alarming stats including one in five women are still avoiding exercise because they don’t have the right sports bra and 70 percent of women wearing the wrong size sports bra. Determined to change the status quo, Reebok embarked on a journey three years ago with one clear mission: change industry standards for the sports bra and reset the bar. Now, just over forty years after the first sports bra came to market, Reebok has released the PureMove Bra in its latest colourway – Shattered Ice.

This Bra’s use of Motion Sense Technology is the result of treating a performance-based fabric with STF (Sheer Thickening Fluid) – a gel-like solution that takes a liquid form when in a still or slow-moving state and contrastingly stiffens and solidifies when moving at higher velocities. This fabric technology, adapts and responds accordingly to the body’s shape, velocity of breast tissue, and both type and force of movement. The end result gives wearers a bra that stretches less with high impact movements, while providing the comfort and light support that one would desire during rest and lower intensity activities.

Integral in PureMove’s three-year development process, was Reebok’s work in the lab, testing breast movement and product variations with the University of Delaware. Here, the two joined forces and upped the ante on industry standards for breast biomechanics that would inform both PureMove’s final design and Reebok’s full sports bra collections. Industry standards for breast bio-mechanic testing typically included an average of only two to four motion sensors on the chest area to track bounce and support, but Reebok and the University of Delaware utilised 54 unique motion sensors on this area during its rigorous testing process and used this data ensure every detail was covered and accounted for in PureMove’s development.

The end result is a second-skin like design that creates a barely-there feel. Key performance features of the PureMove Bra in addition to the reactive fabric technology include:

“Many would assume that the more support a sports bra gives would equate to the more fabric, straps or hooks its comprised of. However, by utilising our Motion Sense Technology, PureMove’s design is quite deliberately the opposite,” said Danielle Witek, Senior Innovation Apparel Designer at Reebok. “The minimalist design of the bra may seem deceiving when you first hold it, but you should not confuse this for lack of support or technology. Every single detail is intentional and directly informed by years of our testing and research.”

The PureMove Bra – Shattered Ice is available in an extended range of 10 unique sizes, aimed to specifically address consumer feedback around the industry’s lack of solutions for those who find themselves in between standard sports bra sizing, The PureMove Bra size range includes: XS, XS+, S, S+, M, M+, L, L+, XL, XL+, designed to help ensure a more tailored fit for wearers. 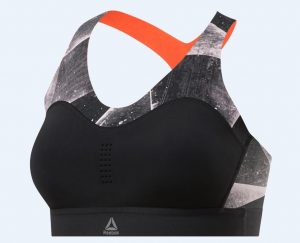 Imagine the serenity of walking through a Japanese garden, the sound of nature, the whisper of the wind. Hold that thought. It is there…