Popular athleisurewear label Lorna Jane has received a $5 million fine from the Australian Competition and Consumer Commision after making false and misleading statements about its Lorna Jane Shield range. From July 2nd to July 23rd, the brand admitted that it was marketing to its consumers that the LJ Shield Activewear "eliminated", "stopped the spread" and "protected wearers" against "viruses including COVID-19".

This misleading information was on in-store signage, on their website, posted on Instagram, press releases, and in newsletter emails to its customers. 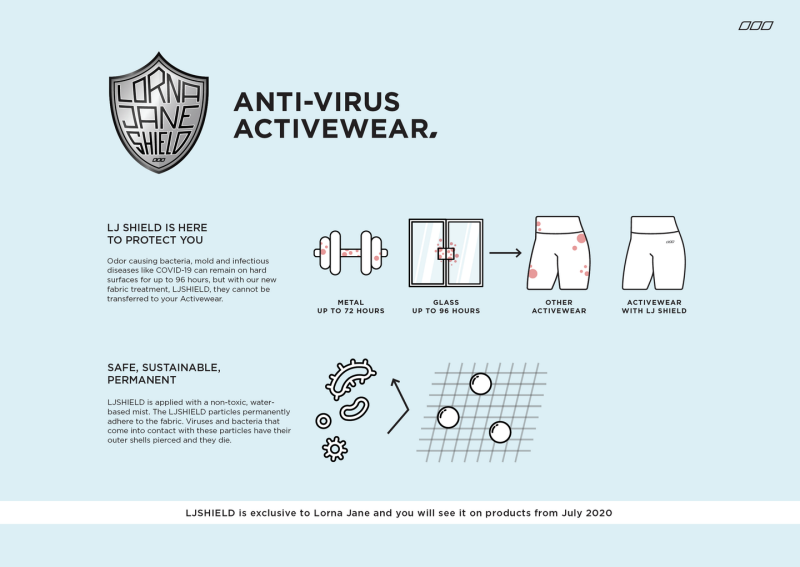 "Lorna Jane falsely promoted its LJ Shield Activewear as eliminating or providing protection from COVID amidst growing numbers of COVID-19 cases in Australia," explained Rod Sims, ACCC chair. "The whole marketing campaign was based upon consumers’ desire for greater protection against the global pandemic. The $5 million in penalties imposed by the Court highlights the seriousness of Lorna Jane’s conduct, which the judge called ‘exploitative, predatory and potentially dangerous."

Lorna Jane has also admitted that it had falsely represented it had a scientific or technological basis for making the ‘anti-virus’ claims about its LJ Shield Activewear, when they never did any scientific testing and had no results showing the effectiveness of the product against viruses. It didn't have any scientific evidence at all. Founder and chief creative officer, Lorna Jane Clarkson, authorised and approved all LJ Shield Activewear promotional material, and was involved in crafting the words and developing the imagery used in the marketing campaign.

"This was dreadful conduct as it involved making serious claims regarding public health when there was no basis for them," Sims said. "This type of conduct is particularly harmful where, as here, consumers cannot easily check or monitor the claims made."

An iconic denim retail store’s founder has passed away. Established in 1988 by Kevyn Male, Route 66 held its own in Newmarket for decades…