The make-up preferences of Chinese consumers are highly influenced by the exposure of social media. Consequently, the make-up market is projected to grow from C¥40.8bn (US$5.9bn) in 2020 to C¥60.8bn (US$8.9bn) by 2025 at a compound annual growth rate (CAGR) of 8.3 percent through 2025, stated by GlobalData, a leading data and analytics company.

In GlobalData’s report, it reveals that the market is majorly driven by growth in the face make-up category, which is forecast to register the fastest value CAGR of 9.2 percent during 2020–2025. The category is followed by eye make-up, which is projected to record a CAGR of 7.9 percent during the same period.

"The beauty and personal care business is seeing a surge in demand for higher-quality, luxury, high-end brand items as a result of rapid urbanization, rising disposable income, and social media exposure. Social media and influencers play a key role in the growth of local brands," explained Sukanyashri Kabali, Consumer Analyst at GlobalData.

"For instance, an online cosmetics brand, Chando partnered with a video sharing platform Bilibili with an average monthly user base of 223.3 million in Q1 2021, and is expected to reach 400 million users by 2023. Chando garnered popularity through this platform and ranked fifth in the beauty category on the e-commerce platform JD.com."

‘E-retailers’ was the leading distribution channel in the Chinese make-up market accounting for a value share of 36.7 percent in 2020, followed by department stores and hypermarkets & supermarkets with shares of 22.5 percent and 13.8 percent, respectively.

L'Oréal S.A., LVMH Moet Hennessy - Louis Vuitton and Amorepacific Corporation were the top three companies in the Chinese make-up market by value in 2020, while Maybelline and L'Oreal Paris were the leading brands.

"Consumers in China have a growing affinity towards traditional Chinese style and culture," Kabali concluded. "As such, domestic brands such as Florasis are launching products made using traditional Chinese recipes and ingredients, such as herbal extracts and flower essence, with a focus on heritage. For example, the company’s 2020 launch of the Floral Dewy In-Porcelain lipstick was inspired by the ancient Chinese porcelain arts culture." 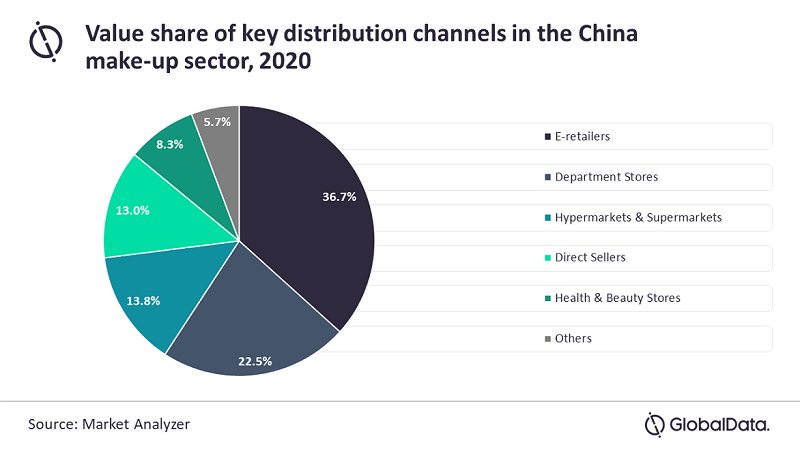