2,700 visitors from 79 different countries, 406 exhibiting companies and three days of fair to mark the recovery of the footwear industry.

These are the numbers that make all the difference for this on site edition of Expo Riva Schuh & Gardabags which has just drawn to a close. Despite the uncertainty caused by the current social and economic situation, the results were excellent in terms of participation, generating a feeling of positivity and satisfaction, rewarding the efforts of the organisers, the exhibiting companies and the buyers. 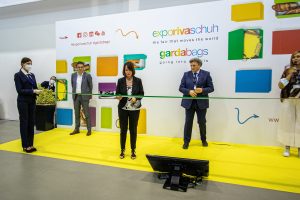 Over 2,700 visitors arrived from 79 different countries with 406 companies exhibiting at a fair capable of attracting buyers not only from all over Europe – and in particular from Italy, Germany, Poland, Spain, France and Holland – but also from Russia, Canada, the United States and Taiwan. They overcame the limits on international travel to once again make Riva del Garda the heart of their businesses.

One thing which emerged from these three intense days was a healthy optimism for the future of the footwear and leather goods industries. This same feeling was confirmed by the data contained within the Market Survey carried out by the fair which comprised a detailed analysis of trends for the first half of the year and forecasts for the second.

“At a time when exports are still suffering due to the blocks imposed by the pandemic,  taking part in this fair means a recovery for these sectors which are amongst the first to emerge from the crisis and find new customers who can temporarily substitute those who are still unable to travel. This trend was also confirmed by the survey which foresees greater flows of export within the various continents, at the expense of international exchange with more distant countries, in this so-called proximity globalisation,”  commented Enrico Cietta, Economist and Chairman of the Scientific Committee. 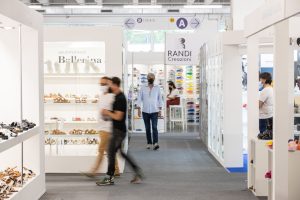 The 95th edition of the event also provided the opportunity to gather the first impressions of the Digital Connection experience, which was launched on 13th June and continued throughout Expo Riva Schuh & Gardabags and will remain active until 30th September.

During the three days of the fair, the digital platform saw a surge in the number of connections, supporting the business of over 120 companies who took part virtually. This will likewise enhance the development of a tool that, throughout the long road towards a return to normality, cannot fail to be instrumental for the international footwear and accessory community.

“The return to Expo Riva Schuh & Gardabags on site is a very important turning point for us and proof of the courage which exists, not only within the exhibition sphere, which has demonstrated maturity and professionalism, but also the tenacity of the companies and the strong motivation of each and every buyer, who were able to restart their businesses in complete safety,” concluded Roberto Pellegrini, Chairman of Riva del Garda Fierecongressi.

He confirmed that Expo Riva Schuh & Gardabags will take place once again from 15th to 18th January 2022. 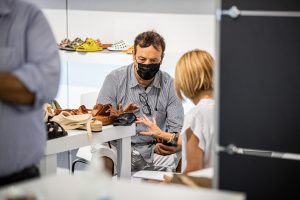 Right from the outset, we were surprised at the level of contacts and the orders made. In particular, as well as the Europeans, we also met buyers from Russia and the United States. This is a good sign, but on the other hand it was time to get back together again, especially for a product such as ours that needs to be seen and touched. People believe in the importance of being there and, as soon as the Italian government removed the restrictions on exhibitions, the response from our companies was immediate:  we are represented here by 20 companies on-site (about half the usual number) and another seven online.

We have been taking part in Expo Riva Schuh for 13 years now and it is an event that we consider to be fundamental for meeting the Italian and European market, which are a priority for the Pakistani industries.  After a year on hold due to the pandemic, it was vital for us to get back together again to reignite relationships with our customers. The fair provides an excellent opportunity to exchange views and restart. At this edition, we took part with ten companies, seven of whom belong to the Pakistani footwear association and during the fair we were able to meet new customers, taking advantage of the opportunities offered by a more condensed event, resulting in more visits to the stand, especially from new contacts from Europe and the East.

Expo Riva Schuh is the fair from which the recovery starts and the first to return on site: an opportunity which Turkish companies did not want to miss, to be able to get back in touch with the European market. The Turkish group at the fair is important from a statistical point of view. Under the banner of our association, 11 companies took part in Riva del Garda and were very pleased with the outcome, especially for the new contacts generated.

I am very satisfied with the fair. It is the first time that we have taken part in Gardabags and I must say that it was excellent. We have made a lot of interesting new contacts with Polish and French buyers. I am also pleased with the contracting agreements that we have struck, with both an important brand and also with other exhibitors who want to link bags to coordinate with their footwear. Despite Covid, we have never stopped working, but I am delighted to have received such a positive response also through our participation in this event.