The duo opened the doors to their very first store in Auckland’s Drake Street in 2002 with a vision of an Antipodean take on the curated concept stores they had visited overseas. The store was an industrial space, painted with the help of friends, which housed a café alongside fashion brands hand-selected by the pair. With an invaluable direct line to know what customers were loving and more importantly what they weren’t, this store became the pair's training ground. 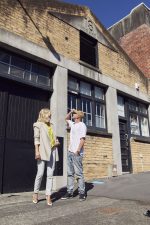 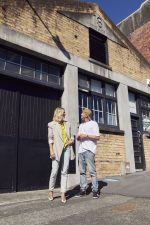 Twenty years later, face-to-face connection with customers is still something Dee and Rigden make time for.

Being a destination store, the business needed to give customers a reason to visit.

“Those early years were challenging, we pulled out all the stops to build the Superette brand and push the boundaries with our in-store experience - from opening doors at 7am and serving coffee to hosting art exhibitions for new brands,” said Dee.

The co-founders made sure to keep Superette stocked with new exciting brands that were new to New Zealand and exclusive to their store. In the two decades since, Superette has come to be known for its one-stop offering that strides the line between luxury and liveable with ease. Now stocking over 270 brands, the business has eight physical stores and is round-the-clock online, with fashion at its core alongside a curated home and lifestyle offering. Superette was also an early adopter of online making their mark with a seamless experience and a steady flow of newness for customers. It’s a formula that’s proven itself – online trade now accounts for 40 percent of the business and is growing 30 percent year on year.

While making a name for itself, Superette is also credited with building a Kiwi fanbase of Australian labels like Ksubi, Bassike and Camilla & Marc, many of which remain constants of the offering today.

The founding duo have led the buying since day dot and stick to one simple rule - if they don’t love it, they don’t buy it - a belief that has served them well with sales now 40 times what they were in year one.

“While there were trends like the Von Dutch cap craze we were happy to see come and go, we’re also proud to have helped build cult brands like Ksubi and Zimmermann into the mainstays they are today. Our relationship with these brands has been underpinned by a mutual respect and understanding of what we can offer each other,” said Dee.

Everyone from the 20-something party girl or guy about town, right through to the stylish mum on the run is catered to at Superette. There is even an edit specifically for stylish little ones, and a carefully selected range of homewares with an elevated spin.

The founding pair have celebrated recent milestones. In 2015, with the launch of Superette’s name brand collection, which now accounts for 10 percent of total sales and the 2019 launch of the Superette International concept, stocking international brands like Max Mara, Alexander Wang and Helmut Lang. The 2021 ‘Superette Leisure Club’ launched mid-lockdown, offering cosy essentials and sold out in a matter of weeks.

As well as smart business choices, people have been integral to Superette’s epic 20-year run. The business now employs 120 staff across the country -a 50% increase from 5 years ago.

The universal appeal is what has shifted Superette from a simple fashion store into a lifestyle destination. Dee and Rigden have lofty goals to double online revenue and open four more Superette International stores in the next four years.

To celebrate the 20th anniversary, Superette will be releasing a capsule collection as an ode to the Superette classics -the boyfriend shirt, a slip dress, off-duty sweats and more. This will be followed by limited edition collaborations with Bassike, C&M, Zoe & Morgan, Just Another Fisherman and others.

BW 36.174 geographically maps the longitude and latitude of Auckland New Zealand, where each garment is created by hand. Since establishing his label, Blair Wheeler has worked…